Full disclosure: I love trains (and pretty much anything that rides on rails). As a toddler, rather than playing with my Tonka trucks in a sandbox like the other kids, I lined mine up in a row and drove them along imaginary tracks. Go figure.

I also enjoy historical things and places, so it made sense then that I had to combine the two and take a ride on the San Diego Metropolitan Transit System’s (SDMTS) vintage trolley.

The San Diego Electric Railway, founded in 1892 by sugar, transportation, and real estate magnate, John D. Spreckels, operated well over 100 route-miles of streetcar service throughout San Diego during its peak of operations. In the late 1930s, street car ridership was in decline and, in and effort to improve ridership, the Presidents Conference Committee (PCC) came up with a new, more comfortable and appealing design for streetcars. But, despite those improvements, more comfortable buses and automobiles brought about the end of street car service in San Diego in 1949.

SDMTS operates two vintage PCC cars—529 and 530—and volunteers spent over 10,000 hours performing a full restoration on car 529 alone. They did a phenomenal job. The interior and exterior were immaculate, with no detail overlooked, and it’s quite obvious that SDMTS takes great pride in preserving its heritage.

The vintage trolleys operate on the Silver Line—a loop around downtown—and it takes about thirty minutes to complete the full loop. The trolley will stop at all the standard downtown trolley stops, so you can hop on board at any of them. The summary schedule on the website, however, only shows the departure times from the 12th & Imperial Avenue Transit Center.

Stepping onto this rolling piece of history was a magical return to a different era. The green tinted glass, the chromed manual window cranks, the incandescent light fixtures, and the dark upholstered seats brought me back to my childhood riding our a cream-and-green colored 1954 Chevy Bel-Air that was passed down to my parents after my grandfather passed away in 1963.

The ride itself wasn’t as smooth as riding on the present-day trolleys, with a little jerkiness to the starts and stops, but that was all part of the fun. You could also feel the suspension in action, with the car rocking ever-so-slightly as people stepped on or off the trolley.

Our driver welcomed passengers as they boarded and thanked each of them as they left, adding a personal touch reminiscent of that bygone era. He obviously took great pride in what he was doing.

For a train nut like me, it was the best $2.50 and thirty minutes I’ve spent in a while.

What You Need to Know

Cost: $2.50 for Adults; two children 5 and under ride free with paying adult; $1.25 for seniors/disabled/Medicare with ID. Monthly and day passes also accepted.

Tips: Regular transit riders will use the vintage trolley alongside us train nuts and history buffs. Just make sure that you have your fare paid/day pass at hand. About one-third of the time that I’ve ridden on MTS Trolleys and buses, an MTS transit police officer has checked to make sure I paid my fare. Get caught riding without having paid the fare, and you can face a hefty fine. 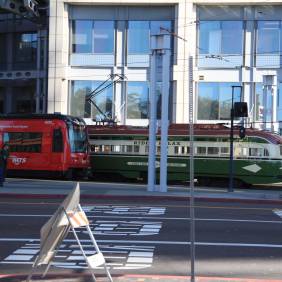 New and Vintage together 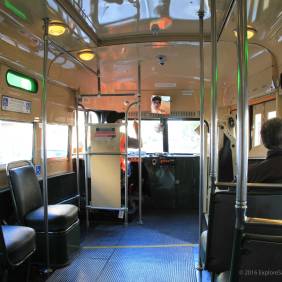 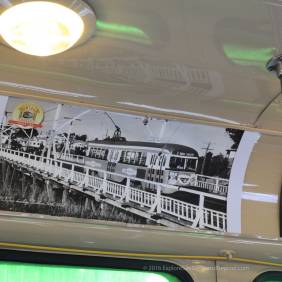 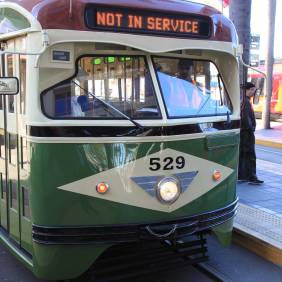